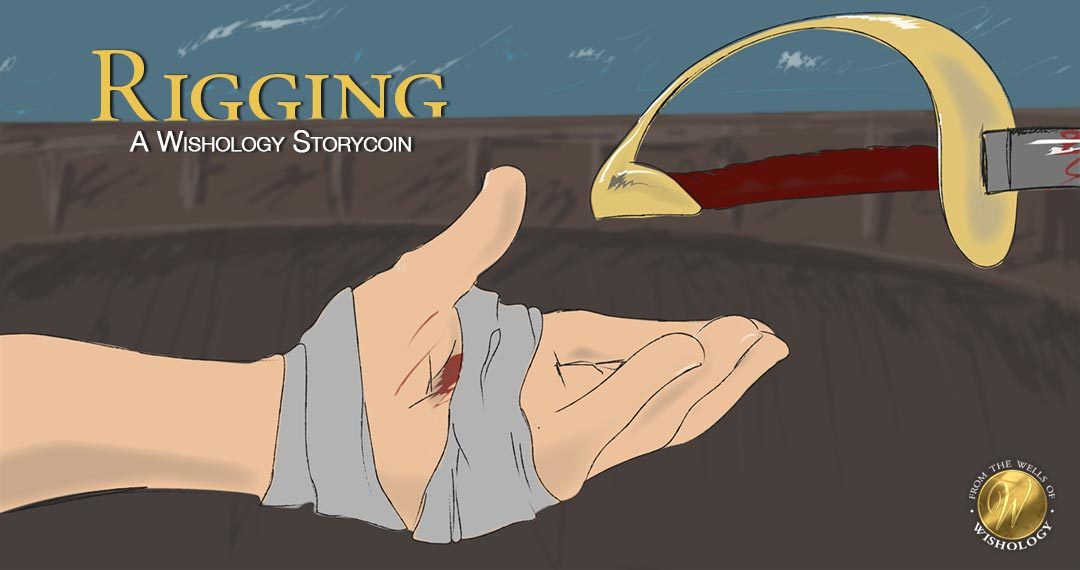 Waves gently rocked the old ship back and forth from bow to stern. She groaned as her weight shifted with the men walking about her deck and the pressures of the sea lapping against her wooden hull. Pulleys and ropes creaked as they stretched to keep hold of three columns of billowing sails filling up with air like lungs.

It was the type of day that encouraged men to sign up for the royal navy — sunny skies, dancing waves, and a strong wind. A day filled with the cheerful songs of sailors on a speedy voyage. A day with nothing to fear but an honest day’s work.

After tying off the rope, he looked down at his hands. Blisters were appearing on top of blisters. The left hand had a cut from helping the ship’s cook peel potatoes in the galley. The right hand had a splinter lodged deep in the palm. They were bloodstained and filthy, red and sore, burning from countless lengths of rope grinding through them.

He lifted his hand to his teeth to gnaw the splinter out but was stopped before making the first surgical chomp.

“Now get after scrubbing that deck!”

Darby had requested that his hands be wrapped the day before, but the first mate had denied the request, saying they required preparation for sea duty—“roughed up to be toughed up.” And he had to be the best cabin boy he could be, if he had any hope of moving up the ranks to captain someday. But his hands were almost unusable, and his concern was with — God as his witness — being more productive.

As a lowly cabin boy, he wasn’t supposed to make requests. He was to be obedient, expedient, and above all, ready to die for his ship. Making the same request for a second time might as well be a request to be thrown overboard. So, it was only natural that he was trembling when he approached the helm and addressed the first mate.

“Sir, might I request…”
“Is this about your hands again, Sailor Ferne?” the first mate scowled down at Darby, who hung his head, already regretting his decision. “Well, let’s see them, then, boy. Come on. Swiftly now.”

Darby held his battered hands out in front of him, allowing the first mate to inspect what remained of them.

“Ah, I see. Very well, then. To the infirmary with you to get your riggers wrapped.”
“Aye aye, sir! Thank you, sir!” Darby said as he took off running.
“And cabin boy!”

Darby whipped back around and stood at attention, straight as the ship’s mast.

He climbed down a ladder, jumping over the last few rungs and onto the deck below. His bare feet slapped across the decking until he reached the door to the infirmary, which he stupidly flung open without knocking.

“What is the meaning of this?” the ship’s doctor demanded as he leapt to his feet so fast that his powder whig flew off his head. Even when making a demand, his voice was a bit higher than that of most men.

“And fancy that an emergency, do you?”

“I should hope not!” the doctor yelled. “Now,” he sat back in his chair, apparently not realizing he had lost his whig, “let us do this properly, shall we? Close the door. Go on.”

He motioned for Darby to leave the room.

“Now, be civil,” the doctor called from the inside.

Darby knocked on the door. After a long moment of silence, he heard the doctor’s voice inviting him to come in.

“There, now,” he said with a smile as he approached Darby. “What can I…”

Something soft beneath his feet stopped him. He peeled his whig off the floor and tossed it onto his desk with a sigh.

“What can I do for you today, young man?” he asked, folding his hands behind his back.

“First mate Coyer instructed me to have my hands wrapped, sir.”

The doctor motioned for Darby to take a seat while he retrieved a roll of gauze from a storage cabinet. Taking ahold of Darby’s hands, he inspected them through tiny glasses clinging to the tip of his nose and confirmed the first mate’s decision. Without a word of warning, he snatched a pair of tweezers from a collection of tools on his desk and plucked the splinter. Darby was proud of himself for not flinching.

After wrapping Darby’s hands with the protective gauze and checking that he still had full mobility of his fingers, he dismissed the boy.

“Thank you, sir,” Darby said as he swung the door open and hurried out.

No sooner had Darby shut the door than he heard a loud explosion of glass and splintering timbers on the other side. He threw the door back open and found the doctor hunched over his desk, skewered by large pieces of wood. There was a huge hole in the side of the room where a wall and two windows used to be, and he could see another ship in the distance. The warning bell sounded from the main deck.

Darby scrambled back up the ladder and ran to the railing of the main deck, peering over it and around the stern. The other ship was closing in on them at an astonishing speed.

“All hands prepare for battle!” cried the first mate.

Before anyone had time to arm the canons, another blast rang out from the enemy ship, followed by a strange noise whirring through the air. A loud crack came from the main mast. Two black iron balls with a chain connecting them fell to the deck as the mast toppled over and splashed into the sea. Ropes and rigging came snapping apart all over the ship, ensnaring a couple of men and dragging them overboard. Without the main mast, they had no hope of outrunning their enemy. They would have to fight.

The enemy ship floated up to their starboard side. It was within rope swinging distance from above the ratlines, but they had gone overboard with the mast. Expecting to be boarded, everyone drew their swords.

“Lad!” the first mate called to Darby as he tossed him a sword. “Courage and strength, men! Let’s give them…”

All of the cannons on the enemy’s port side fired at once, and every man on Darby’s ship fell over dead, save Darby. They had fired shot clusters from their barrels.

At once, men dressed in tattered, dirty clothing and adorned with jewels, earrings, pendants, and more swung over to Darby’s ship and swarmed the main deck. They tied the ships together and laid a board between them, right in front of where Darby was standing. Then, they stood and waited, ignoring Darby and his sword—clearly, they didn’t see him as a threat.

On the other side, a fit man in a black tunic and a perfectly trimmed black beard stepped onto the board and strode across it. He didn’t look much like he belonged to the crew, but they were all watching him with respect. He was younger, probably in his early 30’s, and the only sign he might belong with this riffraff was a tattoo on the back of his left hand. When he reached Darby, he locked eyes with him and didn’t move.

“Search below,” he said calmly and without breaking his gaze.

The enemy crew dove below deck. Darby could hear the faint clanging of swords and the screams of his dying shipmates.

The man continued to stare into Darby’s eyes until the noises stopped and his crew returned to the main deck. He looked neither happy nor angry, but Darby knew his own eyes were plainly fearful. Regardless, he stood there with his sword pointed at the man, ready for death.

The silence of their standoff was broken by a fat man in white undergarments and a captain’s hat scurrying across the deck. Grabbing a rope, he frantically tried to drag a lifeboat into the water. No one prevented him.

Darby looked over his shoulder to see his cowardly captain. The only thing he had decided to bring in his escape attempt was a bottle of booze, which was supposedly not permitted on the ship. Disappointment washed over Darby, but he pushed it aside, gripped the hilt of his sword tighter, and locked his eyes back onto his enemy’s.

“I serve my captain!” Darby shouted.

With lightning speed, the man unsheathed his sword and struck Darby’s so hard and so precise that it went flying out of his hands and into the sea. Darby stumbled backwards.

“I’m your captain!” the man shouted.

He moved closer to Darby and bent down to meet him face to face.

“And you’re about to learn why that’s a very good thing,” he said calmly, almost smiling.

The man straightened up and addressed his crew.

“The Fortune Runner is ours, men!”

They erupted in cheers, celebrating their easy victory and jeering at the escaping captain.

While they were distracted, their leader winked at Darby, turned his sword on himself and ran it through his own gut. He fell to his knees in front of Darby. One by one his men took notice and stood in shock. The only sound was that of the sea breeze and the creaking of two old ships. The dying man gently touched the side of Darby’s face.

“Darby Ferne… My name is… Captain Oliver Ferne,” he whispered. “When I collapse, take…” He winced. “Take my sword… hold it high… and shout your name.”

Oliver’s hand dropped to his side, and his body began to sway.

“Someday… understand this riddle, my son… The treasure… of our fathers… flies where crows will not.”

Captain Ferne fell onto his side and closed his eyes. The snarling crew slowly advanced on Darby, so he did the only thing he knew he could do. Pulling the sword from his father’s corpse, he whipped around, jabbed it into the air, and shouted at the furious men.

“My name is Darby Ferne!”

At once all of their expressions changed to awe. After exchanging stunned glances for a few moments, one of the men shouted.

All of the men raised their weapons in the air and cheered, shouting Darby’s new title over the waves.

While they were cheering, Darby felt the sun’s warmth being blocked from his back, and he turned to find himself standing in the shadow of a terrifying man who had one vibrant blue eye and one solid white eye, both with dark circles around them. He had a wrinkly scarred face and was grotesquely thin. He was expressionless and looked as though he could fall asleep at any moment. He managed to speak clearly by hardly moving his mouth at all.

“I’m first mate Sígera. Allow me to guide you on a tour of your ship,” he said in a scratchy voice that was barely audible.

Darby was afraid of what mysteries were aboard the grey and white ship, but for now, he was just glad to be alive. He followed Sígera across the plank. The moment he stepped one foot aboard the enemy ship, he felt something pulse through his body and pound on his brain. His ears were ringing. He squeezed his eyes shut from the pain in his head and nearly lost his balance. When the ringing faded, he opened his eyes to find Sígera facing him.

“Welcome aboard the False Star, Captain Ferne,” he grinned with sharp yellow teeth.

Think this Storycoin should become a book? Let us know in the comments below and share it with your friends on social media! Be sure to SUBSCRIBE to our newsletter to catch every new Storycoin and get Wishology insider perks!

Subscribe to our newsletter to catch every Storycoin and get Wishology insider perks!

You must CONFIRM your subscription in the email we just sent you (*make sure to move it from your spam to your inbox*).